Leaving from Dove Springs
We left our Dove Springs camp and headed west down SC94 towards Highway 14.   We crossed the highway and turned left paralleling the road.  In about a half mile you have the option to turn right and drop down into Opal Canyon or continue straight on Sierra View Road.  We continued straight for about a little less than 5 miles and merged onto Hart Rd (EP15).  We continued East on EP15 for a little over a mile until we got to the area just East of the Holly Ash Mine. The mines provide a good excuse to relax in the cool air inside each chamber and have a beer.  As soon as we finished our beer break we headed directly across EP15 to the entrance of the Bonanza Trail.  The trail is designated as EP15 which is confusing because you will need to cross the main branch of EP15 to get to the beginning of the trail.  The good news is that the trail is well marked by a large Bonanza Trail sign. 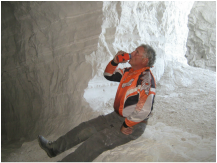 Pete enjoying a cold one
I headed NE and started down the trail. This is a rocky double-wide trail that has a steep rocky downhill ending at the old Bonanza Post Office.  Just past the Post Office, EP15 makes a sharp right and if you continue straight you end up on EP499.  We turned right and followed EP15 down towards Last Chance Canyon.  This is a fun trail that goes in and out of a narrow sand wash and has several old cabins located along the way.  At the bottom the trail merges back Last Chance Canyon (EP15).  We turned right and then right again onto EP30 and headed towards Bickle Camp.  We spent a little time here checking out the camp before we continued East on EP30.  In about 1.75 miles EP30 merged back with EP15 and we continued East until we merged with Mesquite Canyon (EP100).  We headed down EP100 for about 1/2 a mile until we came upon EP204 on the right side of the trail.  This is a jeep road that takes you up to the Walsh Cabin.  Apparently this is part of a formal "Adopt-A-Cabin" program that provides shelter for hikers.  EP204 splits several times on the way up to the cabin.  Going up you will find that the left branch will always be a little easier than the right.  Going down take the right branch if you want the easier route.  The trail is easy at the bottom but has a few steep climbs in the middle.  Going up should be no problem for a high beginner or low intermediate rider (especially on a quad).  Just stay in second gear and keep the throttle open on the steep parts.  The trail levels out on the top and provides some great views of the Fremont Valley between the El Paso and Rand Mountains and Koehn  Dry Lake.
Leaving From the Trona Road Campsite 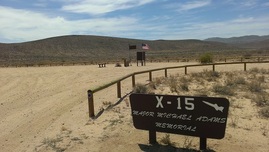 The Major Adams X15 Memorial
Pete, Kevin and I left our camp which was located just off RM44 (3.1 miles East on Trona Rd from Highway 395) and headed NorthEast towards the Major Adams X15 Memorial.  Just pasts the memorial we turned left (North) onto RM28 which is a fun sand wash thats turns West and into RM180 just before the railroad tracks and ends at R5 next to Highway 395.  We took R5 North for a short distance until we came to RM178 which leads to a tunnel under 395.  The tunnel is a nice place to stop and cool off in the shade.  After a short break we continued West on RM178 until we hit EP249, we turned right and headed North towards the base of the El Paso mountains.  This section is pretty much just dirt roads that follow the power lines.  When we got close to the mountains we turned left onto EP253 which is a soft silty trail (as you can see by the video below).  This trail heads West towards Goler Gulch which was an active gold mining area back in the late 1890's through the mid 1930's.  There are still a few building and some mining equipment scattered around (check out my photos page). The main road heading up into the El Paso's from here is EP146 which starts off as a dirt road and widens into a gravel sand wash before entering the tight entrance to the Narrows.  This section of large lava rocks can be quite challenging depending on the condition of the trail which changes often.  If the 4x4's have dug deep holes, dirt bikes and ATV's may need some help getting up the first climb.  Today conditions were great and it was an easy climb into the canyon.  The first section has lot's of curves with plenty of obstacles in and around the trail. 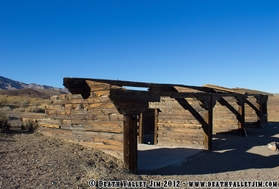 Holland Camp
We continued up EP146 for a couple miles before turning left onto EP159. If you turn right just before you get to EP159 you will climb up Hobbs Wash which is very narrow with lot's of twists and turns.  If your enter the El Paso's from the East and go up EP21 then follow the trail signs towards EP15, you will get to the top of Hobbs Wash which is clearly marked with a large sign.  The trip down the wash is easy any really fun.  Once on EP159 we climbed out of the canyon sand wash.  The middle section of this trail has some large rocks and is moderately steep so beginners on dirt bikes may have problems. Intermediate and novice ATV riders should be ok if they can use the clutch and keep the ATV running while climbing up and around these obstacles.  The very top levels out but has lots of soft rocks.  Once we climb over the top the trail is easy again and drops into a large valley.  It turns into EP11 / EP15 and hears NorthWest towards the mountains.  Off to the right you can take EP11 and head over to the Holland Camp.  This is a good spot for a beer break and while it has no roof, there is usually some shade.  Today we did not stop and just followed EP15 into the canyon.  This is an nice dirt road that wanders through a canyon between some mountains and has several trails that branch off on the right and left.  We continued on EP15 West towards EP26 and the boundary of the El Paso Wilderness.  Along the way we came upon a group of dirt bike riders and then a group of 4x4 vehicles.  The trail merged onto EP15 / EP26 which we took left (South) towards Colorado Camp and another stop for a beer break. 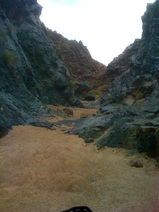 The Entrance to the Narrows
We followed EP15 South past EP30 (which goes to the Bickle Camp) and onto EP100 (Mesquite Canyon).  Once on EP100 we headed down the canyon for a mile or two until we saw EP204 off to the right.  We turned onto EP204 and headed up to the Walsh Cabin.  Going up is the same route as the I described above in my Dove Springs to the Walsh Cabin adventure.  After another beer break at the top we headed back down and took a different route back to camp. Going down the steep parts requires some nerve and the ability to keep the ATV in a low gear but moving at a steady pace.  Once we got back to EP100 we turned right and continued down Mesquite Canyon.  About a mile before the bottom where you would come to Redrock Randsburg road look for a trail that is off to the left and climbs above the road (EP826).  This trail climbs into the desert floor and heads towards the ghost town of Garlock. It makes a sharp left turn back towards the mountains and then turns rights along the base of the mountains before turning right again and heading down into Garlock.  Once down at the highway we crossed and right a few hundred feet before getting to an old building that I thought was a jail but Desert Jim says it was a church and a brothel.  A dirt trail heads South towards the railroad tracks and continues under the tracks then makes a sharp left turn following the tracks East and back towards Goler Gulch.  After about a mile we passed R43 and continued on until we saw R110.  We turned right and cruised across the Fremont Valley toward the Rand Mountains.  This is a double wide trail that is soft in some areas and also has an exposed pipe running down the middle of the trail.  We crossed Redrock Randsburg road and stopped at the bottom of the trail that heads up into Randsburg. If you have never been to Randsburg, it is a must see.  It is a live ghost town with a saloon and general store (open only Friday - Sunday during the summer). It also has a nice rest area with bathrooms, antique stores, and a hotel.  You also need to take at picture at the Randsburg jail.

Our Trona Rd Camp
We decided not to head up into Randsburg and just take R44 East towards highway 395 and our Trona Rd camp.  In about 2 miles we came upon 395, crossed and turned right onto RM5 then left onto RM66.  From this point you have several routes you can take to get back in the Red Mountain area.  If you need fuel then you can stay on RM66 and head South into the town of Johannesburg which has a gas station.  We took RM6 and in about 3 miles we were back at camp. The total trip was about 40 miles and I pretty easy.  I have posted pictures in the photo area of the website, and my GPS tracks in the GPS section.