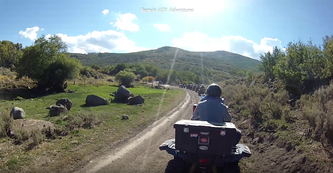 Leaving the staging area.
Mt. Terrill
This is one of the most enjoyable rides offered during the Rocky Mountain ATV Jamboree.  At 60+ miles it is moderately long and took most of the day to complete.  The group of riders met in RIchfield and caravan'd about 14 miles to the staging area.  After unloading and securing the transportation vehicles we were off on the 55 trail.  We slowly climbed uphill and entered the trees right around the intersection of the 55 and the 01 East.  We turned left onto the 01 East and continued past the intersection with the 52 side trail.  We stayed on the 01 East for a little less than 3 miles until it intersected with the 56 side trail.  At this point we turned right onto the 56.  We continued past forest road 1245 and followed Sweet Creek for quite a while.  We passed the intersection of the 56 and the 31 following the 56 left and began an uphill climb.  We stayed on the 56 for over 5 miles turning left on a trail that merged into forest road 1242.

Entering a 50" gate.
We were now above 10k feet in elevation and continued on the 1242 until it intersected with forest road 40.  We turned left and rode across some semi-flat farmland with knee high.  This was one of many 50" trails on this trip.  After a while we entered into the trees again and stayed on the 40 until we intersected with the 4270 (I think).  While this trail is clearly visible in Google Maps using the satellite view, it is not marked in the terrain view or on any map except the Fishlake National Forest Interactive map.  An it's still unclear as to the trail number.  We turned left and headed towards Farnsworth reservoir where we stopped for lunch.

Climbing up into the trees
This trip had almost every type of terrain.  Flat wide jeep roads, double wide ATV trails, uphills, downhills, creek crossings, etc.  Most intermediate riders would have no trouble on this ride.  There were a couple steep uphills with twists and large rocks that you needed to avoid but other than that it was relatively easy.  That being said, the trails required your attention but allowed for you to enjoy the scenery while you navigated.   There were several spots that had low hanging tree branches that required you to duck.  As we reached the far Eastern part of the ride and turned to circle back we followed a stream that had many crossings.  Most had boards that allowed you to cross without doing any damage to the stream bed.  This was one of the most scenic parts of the trip.  Shortly after leaving the stream bed we crossed a wide valley and entered another 50" gate.  One rider on a Yamaha Grizzly was having a problem getting his rig started.  We tried jumper cables but to no avail.

The Aspen trees made this a scenic ride
We still had over 20 miles to get back to the staging area so we hooked up a tow rope to the back of one of the Razor's.  In about a mile we reached a steep, narrow, twisty uphill.  I was amazed to see how well the Razor was able to pull the Grizzly up and around all the obstacles.  After about 5 miles we dropped onto a dirt road that we stayed on for several miles before intersecting with the 56 side trail and reversed our route back down out of the trees.  When we came to the 247 we turned left and took that trail until it merged back onto the 01 East / 53 trail.  In about 5 miles we were back at our vehicles and ready to load up.  Everyone I spoke with enjoyed the ride and agreed that they would do it again.
Click to view full size in Google Maps