Husky Memorial and Black Canyon
Well, even with the best planning, you just don't know what you will find until you are actually out on the trail. I have been to the Husky Memorial many times, always camping in Cal City and making a loop through 4 Corners to gas up for the ride back. This trip was going to be a day ride with my buddy RIch so I needed to stage somewhere close to highway 395. I decided that we would leave the truck just West of the highway right below the old Air Force facility that we call the Pill Box. The Pill Box is located on a hill just North of the old Boron Federal Prison and can be seen from a distance. I created a route using several GPS tracks that I downloaded from the gpsxchange website and from a couple of my previous trips to the Husky. The route was a little over 75 miles round-trip. The quads only have a range of 90-100 miles so I bolted on my spare gas tank to the front bumper of the quad. 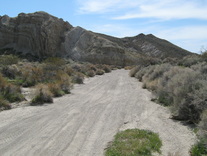 Entrance to Black Canyon
spending over an hour riding cross country. I found some old single track trails and a few sand washes, none which went in the correct direction. Eventually we dropped into a wide North / South sand wash which was about 15 feet below the desert floor. I decided to follow the wash South until we found an exit that would take us East. We continued down the wash a few miles and finally found a trail heading up and out. I turned the GPS back on and followed the arrow North-East and onto a double-wide trail that took us towards the foothills. I really thought that I was headed in the right directly as we dropped into a wide sand wash and headed up into a canyon. But, within a couple minutes the GPS was pointed in the opposite direction and again I turned around and headed back. I was now on a well defined trail that was headed South along the base of the foothills.  After about a mile I spotted an entrance to another canyon directly to my left. The trail dropped into a really deep sand wash and headed directly into Black Canyon. We followed this wash up into the canyon and managed to avoid the really big rocks that were scattered everywhere. The wash started to narrow and the canyon walls got closer. After another mile or two we came upon a couple jeepers who were exploring the canyon walls looking for petroglyphs. I took a picture of a rock painting, check out the photo page and you can decide if it's a real petroglyph.

Our lunch spot
I just couldn't keep the GPS on because of the rough ride through the sand washes so we just plowed forward and hoped we were headed toward the Husky memorial. After a few more miles it seemed like I was heading to far North. I turned the GPS back on a crawled down the trail until I was sure that we missed a left turn somewhere back down the trail. Once again we turned around and looked for the missed trail. The GPS wanted to take me directly to my right but I could not find a way over the canyon wall. I did some off-road travel and went up and over several small rocky hills until I found a very faint single track trail. It was headed in the right direction so we followed it until we came over upon a small patch of rocks and decided to eat lunch since we weren't sure that we would ever find the Husky. After enjoying our Subway sandwiches, chips, and some Vitamin water, we were ready to continue our quest towards to find the Husky. The rock pile was less than 50 yards off the single track trail but of course I could not find it so we drove around in circles for a few minutes until I was sure I was back on track. After less than a mile the single track intersected a dirt road and the GPS arrow pointed directly to my left. We made the turn and within 1/2 mile we had found the Husky.

The Husky Memorial
The memorial included many more plaques than were there when I last visited it about 18 months earlier. While we were at the Husky I decided to see if I could find the problem with the GPS. I removed the seat of the quad and traced back the power cord from the GPS unit to the battery. Sure enough I found the black ground wire was broken. I took out my tool kit, stripped the wire, removed the screw to the negative battery post, slipped the wire around the post and tightened the screw. The GPS was now functional and our trip home should be more direct with less time lost trying to find the trails.  Heading out we followed a rocky trail down Bird Canyon that dropped in and out of a small stream. We came upon a couple nasty areas but managed to get through without an trouble. Coming up to a sharp drop into the stream with a steep inline up the other side proved a problem for me. I was too busy narrating the video I was shooting and took the absolute worst angle down into the stream. I knew immediately that I would not be able to get the quad up the other side and ended up stopped in the stream with my front bumper up against the rocks. I backed the quad out of the stream and we decided to take a route around this obstacle.  Instead of making a second attempt. Rich located a trail that went up and over a small hill. I had never been that way so I went up to check it out. At the top it seemed like a straight drop down the other side so I stopped before making it over. Bad idea, the quad slid backwards down the hill. I managed to keep it straight and finally got it stopped. I walked up the hill and the trail down the other side was easy. We continued over the hill followed the GPS into several very long sand washes, and finally I could see the Pill Box up on a hill directly in front of us. We couldn't find a direct route but managed to take numerous trails and eventually found one that crossed highway 395 and took us directly back to the truck. I can't recommend this trip but will try again by staging closer to Barstow the next time.